A cartoon depicting Sansad Bhavan, the Indian parliament building in New Delhi, as a toilet. By Aseem Trivedi, from cartoonsagainstcorruption.blogspot.co.uk

A depiction of Ajmal Kasab urinating on the Indian constitution. Kasab was the only member of the Pakistani terrorist group that attaced Mumbai in 2008 to be captured. He is currently in Indian custody, sentenced to death. By Aseem Trivedi, from cartoonsagainstcorruption.blogspot.co.uk

The cartoon, by Aseem Trivedi, that provoked complaints to the police. From cartoonsagainstcorruption.blogspot.co.uk 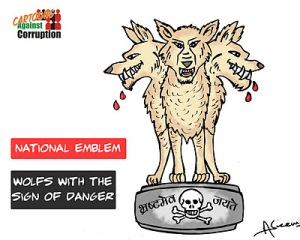 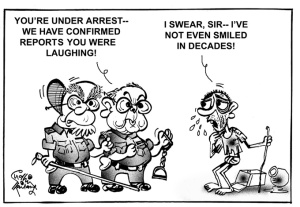 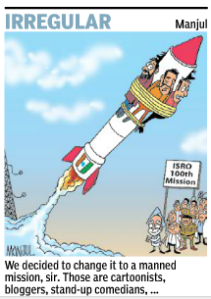 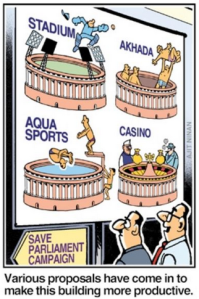 The Indian Express (original – Delhi): Business As Usual by Unny 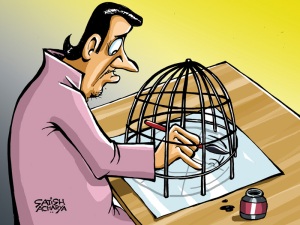 Think. And Be Damned

‘The arrest of the cartoonist in Bengal, the Internet control laws — this is all part of a shutdown of democratic freedoms we take for granted,’ says Sudhir Tailang

I empathise with those baffled by the rapidly spiralling controversy around the series of cartoons depicting Prophet Muhammad. The cartoons were first published in the Danish paper, Jyllands-Posten, nearly five months ago, in September. The initial protest was limited to Denmark’s Muslim minority but was brushed off by both government and civil society. This is when some of the ultra-conservative Danish imams took up the matter and set off for Saudi Arabia and Egypt with a dossier containing the inflammatory cartoons. Last week came the diplomatic explosion: Saudi Arabia recalled its ambassador in Denmark and Libya shut its embassy. Then followed the boycott of Danish goods, demonstrations, strikes, flag burning, and now fires set to embassies in Damascus and Beirut.