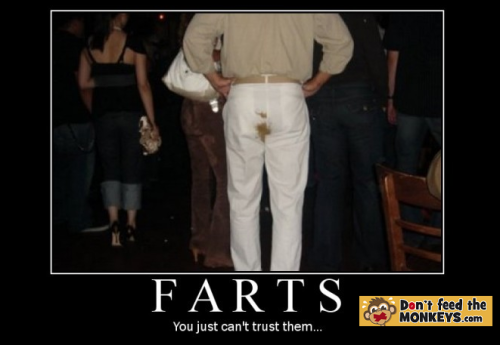 Once there was a man who loved baked beans. He would eat up to 5 and sometimes 6 plates at a time, but that always be followed with smelly, loud, stinky gas.

One day he met a beautiful lady and decided to talk to her. They started seeing each other. Since he did not want her to smell his nasty gas after eating beans, he made the sacrifice, and stopped eating them. One year later they were married.

On his birthday, the next year, he was coming home from work, when suddenly his car broke down. He called his wife to tell her what had happened, and also to let her know that he would be home a little late. She said she understood, but to hurry, because she had a surprise for him.

On his way he saw a diner and smelled baked beans cooking inside. Since he had to walk 6 miles to get home, he figured that by the time he got there all the smelly gas would be gone. He went in and ate 7 bowls of baked beans. On his way back home, he was farting nasty and smelly gas.

Finally he got home and on the door his wife had hung a blind fold for him to wear, so he wouldn’t peek. She sat him at the table, when all of a sudden the phone rang. She made him promise he wouldn’t peek until she got back.

Unfortunately, his gas came back and he couldn’t hold it in any longer. Since she was taking so long, he decided to let it go. He picked up his leg and let it rip. It smelled so bad, he had to get a napkin and fan so she wouldn’t smell it. He wanted to fart again, so he once again picked up his leg, but this time it was so loud and smelly, that it shook the windows and killed the flowers.

After a couple of more farts his wife finally got off the phone, so he stopped.

When she took the blind fold off to his surprise, there were 12 guests seated at the table.